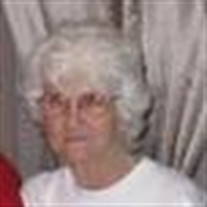 Ruby Helen Beck Marcell 91 of Shepherdsville passed away Wednesday, May 24, 2017 at Kindred Hospital. She was a native of Bullitt County and a member of Belmont Baptist Church. She was preceded in death by her parents George S. and... View Obituary & Service Information

The family of Ruby Helen Beck Marcell created this Life Tributes page to make it easy to share your memories.

Send flowers to the Marcell family.