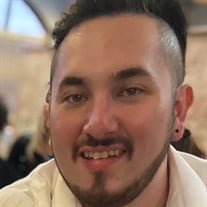 Miguel Jose Andrade, 24 of Shepherdsville passed away suddenly on Tuesday, March 15, 2022 at his home. Miguel was a young man of many talents. He was a virtuoso, having put in years of practice to master his craft of music. Gifted with the ability to play multiple instruments, he had a passion for creating chords and uniting people with the power of musical notes. Music was a tradition in the family, passed from one generation to the next. Miguel’s uncle Kerry taught him to play the guitar at an early age; just as Kerry’s cousin Everett had taught him years prior. Miguel had a treasure trove of guitars that he proudly collected and displayed. Miguel’s mother and Nana handed down the love of piano, they loved teaching him and creating music together. He played clarinet in the marching band and served as a drum major field commander at Male High, where Male always earned numerous trophies under the direction of his band teacher Ms. Nan Moore. Miguel was close with his band mates; they were like a little family that watched out for each other. Miguel was athletic, he was an avid golfer, he loved to play rounds with his Dad and Granddaddy. He held a 2nd degree blackbelt in karate, he was working on his 3rd degree blackbelt. He thrived at tournaments, earning many trophies, he donated his time teaching karate students. Miguel craved knowledge and loved to read; his parents set the foundation by reading to him nightly, his 1st grade teacher, Mrs. Dehr really encouraged him and helped to accelerate his comprehension, by the 5th grade, he was reading on a 12th grade level. Miguel played the part of Abe Lincoln in an elementary school play; he was confident that he could do a better job and declared “I will be President one day!”. Miguel attended Thomas Jefferson Middle, his love of band began there under the supervision of his teacher Ms. Forrest. He started playing clarinet during his first year of middle school, his love of the clarinet carried onto high school. He earned badges and went on adventures with the Boy Scouts. He was disciplined and ready to serve in the JROTC program, he was also very handsome in his uniform. He dreamed of enlisting in the Marines but was unable due to asthma/health concerns. He was always very charismatic and charming but also very mischievous. Miguel was popular with numerous friends. He was a loyal friend, he would give you the shirt off his back, and could be depended upon day or night. Miguel had such a good heart, he befriended those considered outcast. He would fight for the underdog, never letting anyone sit or eat alone, be picked on or bullied. He met his first true friend, Brandon Green in kindergarten at Smyrna Elementary, they often got in trouble for talking too much, they remained lifelong friends. Emily Shouse was his first and best friend at Male High, they played together in the marching band. Miguel was surrounded by love; he understood the importance of family. As a small child, Miguel spent Tuesday nights with his aunt Kathy and uncle Kenny. He was so excited to go visit, his aunt always made his favorite spaghetti dish, and together they created crafts and memories. Miguel and uncle Kenny shared a birthday, making them the coolest guys around. Miguel also shared a strong bond with his uncle Kerry, they enjoyed deep conversations, delving into the philosophy of life. They liked going out for big steak dinners together, savoring every moment. Miguel taught himself to cook, he loved to experiment with new foods and create exciting new dishes. He was a master chef in the making, he used every dish in the kitchen, making big messes for Mom & Dad to clean. Miguel’s mom was his biggest cheerleader, she affectionately called him her “Sweetpea”. He was good to his parents, always attentive to his mother’s needs as she struggled with MS over the years. Miguel was well rounded and amazing talented; he had a smile that would light up a room. He will definitely be dearly missed by so many. We will always love you, our sweet, beautiful baby boy, now you can rest in peace – Love Mom & Dad. He is preceded in death by his grandparents Bud and Betty Harp; and Maria Fuerte and Jose Andrade. Miguel was the only grandchild of his Nana Betty and Granddaddy Bud, they believed it was their job to spoil him rotten. Miguel was fortunate to travel to Mexico and visit with his grandparents Maria & Jose, along with tons of cousins and extended family members. Miguel is survived by his parents Jose and Glenda Andrade of Shepherdsville; his uncle Kerry Harp of PeeWee Valley; his beloved cat Diego and family dogs; along with additional family members and countless friends. A Memorial Service will be held at Maraman Billings Funeral Home on Sunday April 3, 2022 at 4:00 p.m. with Bro. Mark Veatch officiating. Visitation will take place Sunday, April 3, 2022 from 1:00 p.m. until time of service. In lieu of flowers, please consider donating in Miguel’s honor to Male High School Band 4409 Preston Hwy. Louisville, KY 40213. Online condolences to the family may be made at maramanbillings.com

Miguel Jose Andrade, 24 of Shepherdsville passed away suddenly on Tuesday, March 15, 2022 at his home. Miguel was a young man of many talents. He was a virtuoso, having put in years of practice to master his craft of music. Gifted with... View Obituary & Service Information

The family of Miguel Jose Andrade created this Life Tributes page to make it easy to share your memories.

Send flowers to the Andrade family.