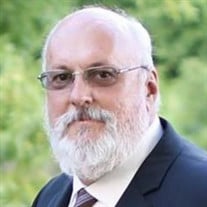 Larry Adam Bohn 64, of Taylorsville, passed away Thursday, March 5, 2020 at U of L Health, Medical Center South. He was born in St. Louis, Missouri. Due to the nature of his military profession, he often moved and lived in several places around the world. He served his country in the United States Navy. Throughout his extensive military career, he served in The Vietnam War, The Persian Gulf War, and was part of the support team for Operation Restore Hope in Somalia. He retired after 21 years of service with the rank of Senior Chief Petty Officer, with honorary discharge. Larry was an avid reader, and valued education. He earned several degrees, and his highest honors were a PhD in Religion as well as an additional Executive Master’s in Business Administration. He was a published author and had multiple professional journal publications and presentations. After his service in the military he worked as an educator in the IT industry, and the last 14 years at Sullivan University as Associate Dean. He was a devout Christian, and active member of his church. Despite his extensive career accomplishments, he would say his greatest accomplishment was his children. He was preceded in death by his parents Adam and Beatrice Bohn; along with a great nephew Ethan Craig. Grandparents, many Aunts and Uncles. Larry is survived by his adoring wife, the love of his life, Margaret Wilkins Bohn; his daughter Katherine Bohn Melendez (S. Nicolas); his sons Nathaniel Bohn, Joshua Bohn, Zachary Bohn (Merrirose), Stephen Bohn, and Andrew Bohn; sisters Cheryl Craig (Charles), Donna Sweeten (Randy), and Mary Craig (Richard); brother in laws Andrew Wilkins (Debora) and Joseph Wilkins; nephews Chad Craig (Elizabeth), Adam Tressner (Krista), and Michael Wilkins; nieces Jamie Fessler, Cara Truitt (Ryan), Amanda Clause (Colin), Kelley Craig, and Lori Simmons (Robert); great nephews Brett Fessler, Malachi Jackson and Jeremiah Mahan; great nieces Tatum Tressner, Emmie Tressner, Aspen Peppers and Gracie Truitt. He is also survived by many Cousins and his Aunt Kay Nagel. Family visitation will be at 4:00 p.m., followed by a Celebration of Life Service at 6:00 p.m. Friday, March 13, 2020 at Encounter Church 9105 Galene Drive, Louisville, KY 40299. In lieu of flowers a scholarship fund has been created for Andrew Bohn. Checks may be made to Encounter Church 9105 Galene Drive Louisville, KY 40229. Please write "Bohn Scholoarship" on the memo line of the check on any donations made. Online condolences to the family may be made at maramanbillings.com

Larry Adam Bohn 64, of Taylorsville, passed away Thursday, March 5, 2020 at U of L Health, Medical Center South. He was born in St. Louis, Missouri. Due to the nature of his military profession, he often moved and lived in several places... View Obituary & Service Information

The family of Larry Adam Bohn created this Life Tributes page to make it easy to share your memories.

Send flowers to the Bohn family.