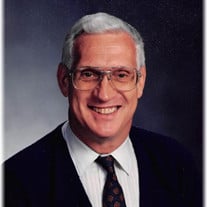 It is with profound sadness that the family of Hugh Eugene Gabbard announce his peaceful passing on Saturday, August 29, 2020. He was 83 years old. He passed away at Baptist Health Hospital in Louisville Ky after a 3 week illness. He was preceded in death by his wife of 57 years, Olivia ‘June’ Flowers, and his parents Eugene Field Gabbard, and Ruth Wilson Gabbard. Hugh was born in Booneville Ky on December 23, 1936. His father was a principal and moved the family to Aurora IN in 1947. Hugh and his sister, Ginny, were fortunate to attend Aurora High School together, and were in the class of 1955. Hugh was a thin, 6’5”, decorated athlete at Aurora High School. He ran track, played football, basketball, and baseball. In 1955, he was awarded the All Sports Award and his basketball team was ranked among the best in the state. The class of ‘55 represented the best of their generation during this iconic time in the history of our country. The bond that was formed with his classmates was a source of joy and encouragement throughout his life. His death will be mourned by so many that followed the talent and the excitement that Hugh, his basketball team, and fellow classmates brought to the families and community during his time in high school. He made many trips back to Aurora to visit his parents, family, parades, and classmates. Out of a long list of scholarships, Hugh decided to attend Eastern Kentucky University where he played basketball, baseball, and ran track. He lettered in all three sports. After a storied four year collegiate career, and being scouted since high school, he was invited to the Pittsburgh Pirates’ training camp in 1960. Hugh was offered a contract to play Triple-A Baseball. In recognition of his athletic achievements, in 1974, Hugh was awarded EKU’s Centennial Athletic Award, in which he was selected as one of the Top 25 Athletes in the school’s history. After receiving a Bachelor’s Degree, and getting married, he earned a Masters Degree in Education at EKU. He and his wife June established their home in Louisville KY. Hugh was a teacher at Fern Creek High School where he taught for 31 years, and coached from 1964 to 1973. He is remembered fondly as the tall teacher with the fun-loving, corny comedic spirit. He was inducted into the 2015 Fern Creek Hall of Fame for being a part of the school’s first ever state championship appearance in 1965, where he was an assistant coach of the ‘Creekers’ baseball team. He continued with his education, and earned a Rank 1 in Education. Hugh was an Army veteran, beginning his military career in college with ROTC and retired having earned the rank as a Lt. Colonel in the 100th Division Army Reserves. His achievements include being a member of the Marksman Team for 7yrs, including national level competitions, and being asked to oversee maneuver training in over sixty different exercises. He and his wife June were active members of Evangel World Prayer Center for 30 years. He joined the Speeders 55, Champions of Honor, Bible Study Classes, and Prayer Line. He and June were also actively involved in grassroots politics, spending a lifetime supporting causes that promote faith in God, strong families, and love of country. He passed this legacy on to his children. Hugh enjoyed a variety of activities throughout his life including fishing trips to Canada with his grandfather, dad, and son Gene, KY basketball, gardening, and traveling to Foley AL to visit his cherished in-laws. Hugh has left a place in the hearts of each person in his life. In many ways, he was the symbol of so much that we seek in life, for he enjoyed every moment, was accomplished, had a strong marriage, was moral, peace loving, had a strong character, beloved by cousins, friends and family, and was at peace with His Heavenly Father. Each of us will remember the sentimental antics that he performed with such joy.... and ‘Until we meet again, may God hold you in the palm of His hand.’ Hugh is survived by his children Hugh “Gene” Eugene Gabbard of Louisville, Jane Gabbard Adams (Richard) of Raleigh, NC, Gary Gabbard of Louisville, Martha Gabbard Gwynn (John) of Raleigh, NC, David Gabbard of Murfreesboro, TN, Julie Gabbard Sandfort (Chris) of Louisville and Brian Gabbard of Destin, FL; his sister Virginia Ruth Goes of Lexington; 14 grandchildren, 1 great grandson, 3 step grandchildren, many wonderful cousins, family members, students, friends, and the Aurora class of ‘55. Private family graveside services were held at Crosswater Gardens with Bro. Kevin McKnight officiating. In lieu of flowers, the family has suggested donations be made to The Lord’s Kitchen, a ministry of Evangel World Prayer Center. Online: thelordskitchen.com. Online condolences may be made at Maramanbillings.com

It is with profound sadness that the family of Hugh Eugene Gabbard announce his peaceful passing on Saturday, August 29, 2020. He was 83 years old. He passed away at Baptist Health Hospital in Louisville Ky after a 3 week illness. He was preceded... View Obituary & Service Information

The family of Hugh Eugene Gabbard created this Life Tributes page to make it easy to share your memories.

It is with profound sadness that the family of Hugh Eugene Gabbard...

Send flowers to the Gabbard family.