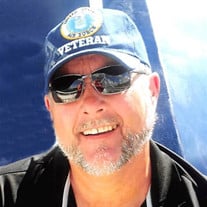 Glendell “Glen” Ray Ryan , 56, born August 2, 1963 passed away on Friday, November 15, 2019 from complications of ALS and Sarcoidosis. He was preceded in death by his loving parents Luke Ryan Jr and Laverne Ryan McGinty, Stepmom Margaret Ryan and Sister, Kathy Ryan Price. Glen proudly served in the US Air Force as a Jet Engine Mechanic. He was on the Southeast Bullitt Fire Department twice. Glen retired from the Louisville Water Company where he was their trainer and heavy equipment operator. He also was a truck driver for several years and he previously owned an Appliance Sales & Repair shop and a Backhoe business. Glen loved traveling, camping, fishing, hunting, metal detecting, hiking and riding motorcycles. He was a very generous person and he had a great personality and sense of humor. His boisterous laugh was infectious to everyone. Glen was a hard worker and many times worked 2 and 3 jobs at a time. He thoroughly enjoyed being around people and loved a good prank. Glen is survived by his devoted and loving wife, Delinda, 5 children, Michael Ryan, Angel Hook (Cody), Tony Ryan, Rae Ryan and Amanda Maynard (Jeremy), brother Willard Ryan (Arlene), Father & Mother In Law – Kenny & Carol (Mom) Hester, several grandchildren, Stepdad Robert “Pop” McGinty and numerous family and friends. He is also survived by his special service dog “Buddy Bear” that has been his constant loyal companion. Glen will be always be missed but especially during the upcoming holiday season as he enjoyed being Santa Claus the last several years and he brought so much joy to those around him. Visitation will be held from 4-8 pm on Wednesday, November 20th and from 2-7 pm on Thursday, November 21st with funeral services conducted at 7 pm following the visitation at Maraman Billings Funeral Home, 605 Preston Hwy, Shepherdsville KY. Burial will be on Tuesday, November 26th at 10 am Kentucky Veterans Cemetery Central, 2501 N Dixie Blvd, Radcliff KY Expressions of sympathy can be made to ALS Foundation or Sarcoidosis Foundation.

The family of Glendell "Glen" Ray Ryan created this Life Tributes page to make it easy to share your memories.

Send flowers to the Ryan family.