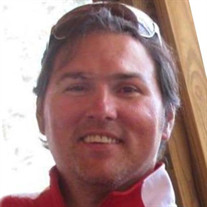 Gary Robert “Robbie” Hess, II, 44 of Shepherdsville passed away after an illness on Saturday, February 28, 2015 at Norton Hospital – Downtown. He received a Bachelors Degree in Psychology from the University of Louisville, a native of Louisville, Kentucky, a member of Southeast Christian Church, nominated to the Board of Directors for the Council of the Blind and a former volunteer tutor for Bullitt County Elementary Schools. He was preceded in death by his father Gary Robert Hess, Sr.. He is survived by his wife Nicole Hess, his sons Jaden C. and Jacob B. Hess all of Shepherdsville, his Mother Patricia Wentland of Brasstown, NC, his siblings; Kristie K. Ammons of Louisville, Vanessa Laufer of Kronberg, Germany, Jeff Wentland of Seattle, WA, Josh Wentland, Tara J. Hizon, and Miko Delafield all of Oak Harbor, WA, his aunts Gail, Donna, Tina, Robin, Joy, Dana and Jody, his uncles John, Mike, Tony, Dave and Donald, Great Aunt and Uncle Joyce and Donald Cheatham and a faithful friend Greg Owen (McGregor). Funeral Service will be 3:00 p.m. Tuesday at Maraman Billings Funeral Home with burial to follow in the Cedar Grove Cemetery. Visitation will be on Tuesday from noon till time of service. Online condolences to the family may be made at maramanbillings.com

Gary Robert &#8220;Robbie&#8221; Hess, II, 44 of Shepherdsville passed away after an illness on Saturday, February 28, 2015 at Norton Hospital &#8211; Downtown. He received a Bachelors Degree in Psychology from the University of Louisville,... View Obituary & Service Information

The family of Gary Robert "Robbie" Hess created this Life Tributes page to make it easy to share your memories.

Send flowers to the Hess family.