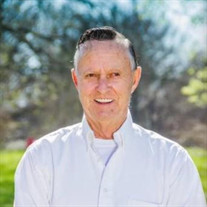 Donald Ray Hedgspeth, 85 of Shepherdsville passed away on Sunday, October 31, 2021 at Norton Audubon Hospital. Donald believed in God, practicing and demonstrating his faith in his own way. He worked in the construction industry for more than 25 years. Donald also managed several rental properties that he owned. He was a wheeler and dealer and could trade or sell anything. Donald had a heart of gold; he was a loving husband and father. Donald would help anyone that truly needed help. Donald enjoyed cutting the grass; he used his lawnmowers to cut much of the neighborhood. He loved to clear the land with his tractor and bush hog. Donald was a passionate coon hunter, armed with his dogs in the dark of the night, he was primed for the thrill of the hunt and success of the capture. Donald loved his fur babies and was a Papaw to his grand fur babies. Donald understood the importance of making time for family and friends; he made a point to talk with them often. Donald loved his wife Faye very much; they had been together since he was 19 years old. Donald had a very loving relationship also with his daughter, Donna. He would talk to her every night and without fail he always said “Adios” to her; that was a special bond they shared. Donald had a very special relationship with his son in law Donnie also. Even though Donald’s immediate family circle was small, it was so special!!! Donald was preceded in death by his parents Homer and Lucy Hedgspeth; siblings Marie Martindale, Johnsey Hedgespeth, Wanda Groomer, Charles Hedgspeth, and Clara Hedgspeth-Williams; along with his fur babies Arnie, Monkey, Amos, Little Mama, Runt and Andy. Donald is survived by his loving wife of 65 years, Faye Hedgspeth; his daughter Donna Hedgspeth-Miles and her husband Don of Shepherdsville; several nieces and nephews; numerous great nieces and nephews; and his grand fur babies Cooper and Missy. The family of Mr. Hedgspeth respectfully request arrangements be private during their time of grieving. Donald had never been to a funeral in his life so did not want to start now! He believed you should give your flowers to people while they were still alive. Burial will take place in Brookland Cemetery.

Donald Ray Hedgspeth, 85 of Shepherdsville passed away on Sunday, October 31, 2021 at Norton Audubon Hospital. Donald believed in God, practicing and demonstrating his faith in his own way. He worked in the construction industry for more... View Obituary & Service Information

The family of Donald Ray Hedgspeth created this Life Tributes page to make it easy to share your memories.

Donald Ray Hedgspeth, 85 of Shepherdsville passed away on Sunday,...

Send flowers to the Hedgspeth family.