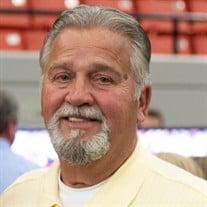 Donnie Tinnell, age 72 of Shepherdsville, KY, passed with his family by his side on Saturday, April 9th, 2022. He was preceded in death by his parents Woody and Lorene Tinnell and siblings Ernest Lee, Ronnie (twin), and Joyce. Donnie is survived by his loving wife of 42 years Fonda, children Angela (Troy), Melissa (Eric), Clinton (Lisa), Jennifer (Jason), Jonathan, JoAnna (Bradley), 12 grandchildren, 3 great-grandchildren, siblings Albert, Larry, Danny, Elaine, and a host of extended family. He was a member of Bullitt Lick Baptist Church. Donnie retired from law enforcement after 34 years of service. He started his career at the Shepherdsville Police Department and was promoted to Chief of Police after six years. He then made a lateral transfer to the Louisville Police Department and continued through the merger when it became Louisville Metro Police Department. Donnie retired as a district detective after serving the Louisville Metro area for 17 years. In 2006, Donnie was elected Bullitt County Sheriff and took office in 2007. Following, he spent a short amount of time at the Jefferson County Sheriff's Office and left there when he was asked to assume the position as Chief of Police for the city of Lebanon Junction. He retired for a second time in 2014. From 2014-2017, Donnie enjoyed retirement, starting every morning at Waffle House, spending time with his family and friends, golfing, boating at Green River, and bringing his new garage to life. He was a Kentucky basketball fanatic, but his true passion was his career. Donnie loved telling police stories and would tell one any chance he got. In 2017, Donnie once again came out of retirement when appointed as the Bullitt County Sheriff and finished that term the following year. From 2018 on, Donnie resumed retirement, enjoying his family in his last years. He often said "it's how you treat people that counts" and would want that to be his lasting legacy for a life well-lived. Funeral service will be 11:00 a.m. Friday at the First Baptist Church of Shepherdsville with Bro. Dean Huff officiating. Visitation will be at Maraman Billings Funeral Home on Wednesday from 5-8 p.m. and Thursday from 2-8 p.m. There will be no visitation on Friday. Burial will follow in Cedar Grove Cemetery. Online Condolences may be made at Maramanbillings.com.

Donnie Tinnell, age 72 of Shepherdsville, KY, passed with his family by his side on Saturday, April 9th, 2022. He was preceded in death by his parents Woody and Lorene Tinnell and siblings Ernest Lee, Ronnie (twin), and Joyce. Donnie is survived... View Obituary & Service Information

The family of Donald "Donnie" Tinnell created this Life Tributes page to make it easy to share your memories.

Donnie Tinnell, age 72 of Shepherdsville, KY, passed with his...

Send flowers to the Tinnell family.