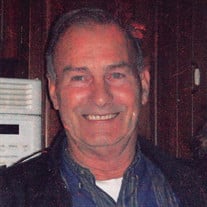 Cecil Ray Ridgway, 80, of Shepherdsville, Kentucky passed away June 15, 2021, at his home with his family by his side. Born on March 26th, 1941, in Shepherdsville Kentucky. Cecil was the son of the late Louis and Essie (Hazelwood) Ridgway. In addition to his parents, he was preceded in death by infant brothers Calvin Ridgway and Albert Ridgway, an older sister Mary Ridgway Kinsey, and a younger sister Linda Ridgway Bishop. Cecil attended Shepherdsville High School and served in the U.S. Navy where he completed electrical training. Cecil was stationed on submarine tenders, the USS Bushnell in Key West, Florida, and the USS Orion in Norfolk, Virginia. It was his time in Key West and Norfolk that he grew a love for the ocean. After returning from the Navy, it was then that he met and married Vivian Elane Portman and settled in Bullitt County, raising a family of three children. They recently celebrated 56 years of marriage in April. Cecil enjoyed fishing, swimming, boating, and riding his bike. He routinely vacationed with his family in Florida, until eventually buying a vacation home in Sarasota, Florida. Cecil was a home builder and craftsman by trade. He was retired from the Regional Airport Authority in 2000. Cecil took pleasure in his retirement enjoying winters in Florida, spending time with his wife, children, and grandchildren. Cecil is survived by his loving wife of 56 years, Vivian Elane Portman Ridgway, one son Anthony Ridgway and wife Winona (Mayes) of Mt. Washington, Kentucky. A daughter Angela Sadler and husband James of Shepherdsville, Kentucky. A daughter Andrea Doyle and husband Aaron of New Albany, Indiana. Ten grandchildren; Alison (Andrew) Vogel, Rachel Coy, Kyle Ridgway, Alysa Ridgway, Amanda Sadler, Emily Coy, Cortney Martin, Whitney Martin, Donovan Doyle and Adrian Doyle. Along with 7 great grandchildren; Carter and Jude, Novak, Benjamin and Blakeley, Ryder and Alexander Jr. Cecil is also survived by a sister Alberta Laswell, brothers William Ridgway, David Ridgway, Carl (Brenda) Ridgway, and Terry (Cecilia) Ridgway. Funeral service will be 1:00 p.m. Tuesday, June 22, 2021, at Maraman Billings Funeral Home with Bro. Van Morris officiating. Visitations will be Monday 1-8 p.m. and Tuesday 10 a.m. until time of service. Burial will follow at Hebron Cemetery. Pallbearers will be Cecil’s grandsons Kyle Ridgway, Donovan Doyle, Adrian Doyle, and Andrew Vogel, and Cecil’s Son in Laws James Sadler and Aaron Doyle. Online condolences may be made at maramanbillings.com

Cecil Ray Ridgway, 80, of Shepherdsville, Kentucky passed away June 15, 2021, at his home with his family by his side. Born on March 26th, 1941, in Shepherdsville Kentucky. Cecil was the son of the late Louis and Essie (Hazelwood) Ridgway.... View Obituary & Service Information

The family of Cecil Ray Ridgway created this Life Tributes page to make it easy to share your memories.

Send flowers to the Ridgway family.