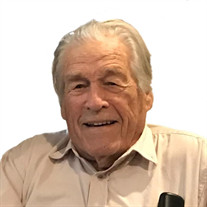 Billy Calvin Watson, 94 of Shepherdsville, joined his Lord Jesus Christ early Sunday morning at his home, surrounded by family. Mr. Watson was born in the family farmhouse in Ardmore, Alabama, on September 25, 1925 where he lived until being drafted for service with the Marine Corps during his sophomore year in high school at the onset of World War II. During the war he saw extensive action with the 18th Air Artillery Battalion in the Pacific theater as a Heavy Anti-Aircraft Gun Crewman and returned to Alabama at the conclusion of the war to marry his high school sweetheart, Lillie Kathlene Montgomery. After owning and running a watchmaker shop for several years, he served as a law enforcement officer in Alabama. He then moved his family to the Louisville area and began building and running several successful small enterprises including an automobile dealership, an auto rebuilding business, a retail paint store, a property management company, and several other ventures. He eventually retired to Shepherdsville, where he enjoyed gardening, raising cattle and spending time with his family. Billy was a long-standing member of Cedar Grove Baptist Church in Shepherdsville and maintained his practice and profession of faith throughout his lifetime. Dearly loved by his family, he will be greatly missed by the many souls that came to know and appreciate his wit and wisdom, his kind and gentle disposition and his inexhaustible sense of humor. He was preceded in death by his parents; Henry and Tommy Barber Watson; along with seven brothers and two sisters. He will be remembered as the adoring husband of 73 years to his surviving bride, Lillie; the loving father of two surviving children, Kerry Watson and Gayle Engstrom (Rojir) both of Shepherdsville; the beloved grandfather of nine and the honored great-grandfather of 28; the devoted older brother to Boots Watson (Dora Dean) of Ardmore, AL, and Betty Jean Southerland (Howard) of Pulaski, TN. Billy is also survived by a host of nieces and nephews that he cared for deeply. Funeral will be held at 1:00 p.m. Friday, March 13, 2020 at Maraman Billings Funeral Home in Shepherdsville, with Bro. Tommy Smith officiating. Burial will follow at Cedar Grove Cemetery with full military honors. Visitation will be Thursday from 1:00 to 8:00 p.m. and Friday from 9:00 a.m. until time of service. Online condolences to the family may be made at maramanbillings.com

Billy Calvin Watson, 94 of Shepherdsville, joined his Lord Jesus Christ early Sunday morning at his home, surrounded by family. Mr. Watson was born in the family farmhouse in Ardmore, Alabama, on September 25, 1925 where he lived until... View Obituary & Service Information

The family of Billy Calvin Watson created this Life Tributes page to make it easy to share your memories.

Send flowers to the Watson family.